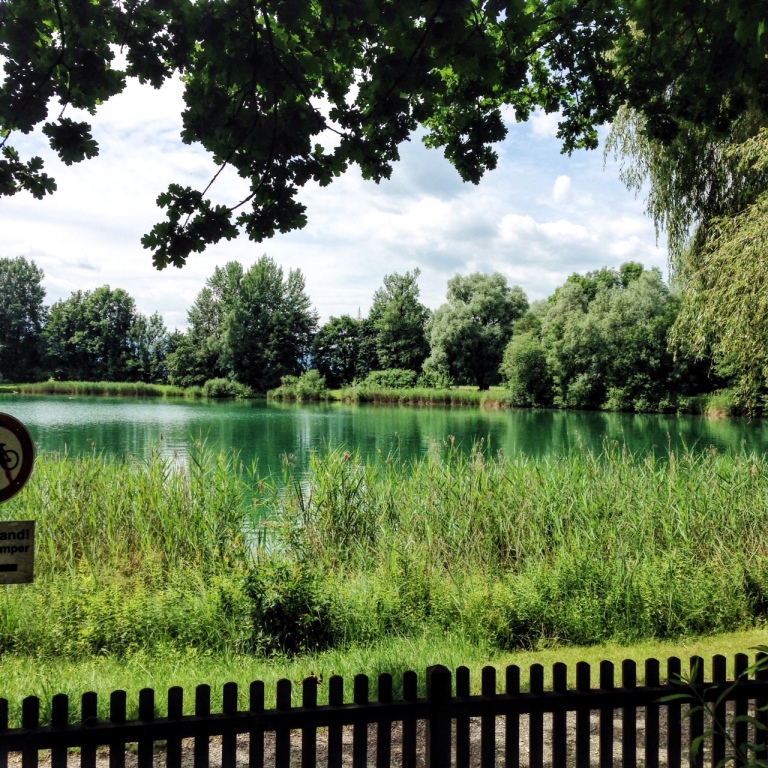 I started today’s ride filled with apprehension, not because I’ve spent the last week partying, I hit the Alps in two days and my body feels worse than it did when I started, but because today’s ride marked the first part of my lonesome voyage.

Until last Sunday when Taylor’s bike broke for the millionth time (slight exaggeration but not far off), we had ridden nearly every day together. We’ve had some incredible experiences…….the river of straightness, the crash, route 48, the forest of hounds, Strasbourg generally, crossing the Rhine, racing thunderstorms through the black forest, to name but a few. Every moment, good or bad, has been made special by having Taylor to share it with. He’s best not spoken to in the morning until he’s had a coffee and a fag and I’m best not spoken to whilst on a climb. We established a great understanding of each other for this adventure really early on and it has just worked so well. He enjoys the beauty in everything, he sings Disney songs while he rides, he gets concerned when I’m stressed and tries his hardest to reassure me, he makes me laugh so much. He enhances every day that we share together. Being able to vocalise with somebody else how incredible something looks or feels somehow validates it and makes it feel more real, we did a lot of that.

When Taylor’s bike broke on Sunday we had to make a quick decision about our next steps. We had booked a bus for both of us to travel from Strasbourg to Munich, but the breaking of the bike meant we would miss the bus. Taylor’s bike would prevent him from riding anywhere and I needed to be in Munich for my flight to Ibiza the next day so we were left with no choice other than to separate, prematurely. At 6pm that evening I got on a bus to Munich and at 3am Taylor got on a bus to Berlin. Filled with immediate concern for Taylor hanging around in Strasbourg until 3am, longer term concern about how he would fare in Berlin, sadness for all the adventures we would miss out on sharing and apprehension about going forward on this adventure alone, the tears streamed down my face as the bus took me further and further away from my boy.

After an hour of trying and failing to pull myself together I managed to focus my thoughts on the forthcoming days. A brief interlude, in Ibiza, with the girls to celebrate our 30th birthdays, I couldn’t think of anything I wanted more to lift my spirits. The days with the girls were as incredible as I had hoped, I got straight off the plane and met the girls at a club, talk about whirlwind. It was so great to see their faces, it had only been 3 weeks, but it was still wonderful to see them. The time went so quickly compared to the time that I’ve been on the road which seems to have passed comparatively slowly. I loved every moment of being there with them.

I had to catch a flight straight from going to see Fat Boy Slim at Amnesia, so I checked into a hotel near Munich airport to catch up on sleep after my flight. That evening I decided that before my cycle adventure could progress, I had to see Taylor again. Our premature parting had left me feeling sad and uneasy so I booked a bus for the next day to go up to Berlin for a couple of nights. I wanted to see how he was getting on and just give ourselves the chance to properly say bye to each other. It was definitely the right choice, it was so lovely to see him for an extra couple of days. We didn’t do a huge amount, think we just enjoy being around each other. We actually laid hungover in our hostel beds one evening and watched the final episodes of Game of Thrones, that was my favourite evening.

So, yesterday evening I departed Berlin to start my adventure alone, leaving Taylor was sad but it felt OK this time, but thoughts and questions were still flying through my head as the bus hurtled towards Munich airport. Upon arrival I could feel myself trying to avoid the unavoidable, I’ll just get a coffee, I should re-pack my panniers, maybe that shop with have some energy bars etc. But there was no getting away from it, so after an hour or so of faffing, I started on the first days ride which marks my solo journey.

My heart was full of sadness and my mind full of doubt, how am I going to cope with not seeing my loved ones for so long, I feel lonely, maybe I should just do Europe and then go home, I definitely won’t last this out. The enormity was hitting me, I’m not going to see the faces of those I love, who am I going to vocally validate these experiences with as I ride through multiple different countries, I’m barely going to hear my own voice on a daily basis, if I get lost or hurt I only have myself to push myself on, I’m not going feel someone’s skin against mine for months. The solo part of this adventure just became really really real.

As I clocked up the early morning miles I was faced with a glorious day, some stunning scenery and a few gentle hills and after an hour or so I noticed that my sadness and doubt seemed to be subsiding and my mind was emptying itself, simply taking in the views and concentrating on the road ahead. Then I saw the Alps ahead of me, majestic in the morning haze, my biggest challenge so far. Just before midday I arrived at a beautiful campsite opposite a stunning lake in a place called Schechen, I put my tent up and took myself for a refreshing dip in the lake, spending the rest of the afternoon sunbathing, reading and doing my washing.

I didn’t think for one moment that this adventure would be easy, but the reality is that there are going to be some extremely lonely times. That said, it’s just not useful to speculate too much about if and when that loneliness will hit me. All I can do is focus on each day as it comes and deal with what I’m feeling at the time.

Thank you Taylor for making the start of this adventure so incredible, thank you to my girls for Ibiza it was such fun, and thank you to everyone who is following my adventure via my blog and Instagram. Please keep in touch, you have no idea how much it means to this girl sitting in her tent in a tiny little place that you or I never knew existed until today.

I would love to be able to share every moment of this adventure with someone.

Today has been a great day, I really hope tomorrow will be too.